Why should a business pay for phone on hold music? Because publishers and writers deserve compensation for making your business a little better, and because they have the law on their side. We present this article on Phone On Hold Music Licensing as way of informing the public about how do music on hold the right way.

When you place a caller on hold and transmit music via your telephone lines, that is a public performance of the music. It is your responsibility to obtain permission to perform ASCAP songs from ASCAP or directly from the copyright owner. —ASCAP

Through contractual agreements, Easy On Hold(R) pays all applicable music licensing (royalties) on behalf of our clients. Without a contract with Easy On Hold(R), your business must execute its own agreement with performance rights organizations. One way or another, all businesses need a license to play music (whether on hold or in their space).

We have provided articles on this topic at easyonhold.com. Review articles here.

What Is A Public Performance?

Each PRO collects royalties for “performances” of music. A performance is considered any public use of music, such as background music in a restaurant or store, the music you hear while getting that therapeutic massage or what you hear while waiting on hold when you call to make a doctor’s appointment. They disperse that money to the composers and publishers within their organization.

Licensing payments are delivered to the publishers and composers by Performance Rights Organizations. They are: 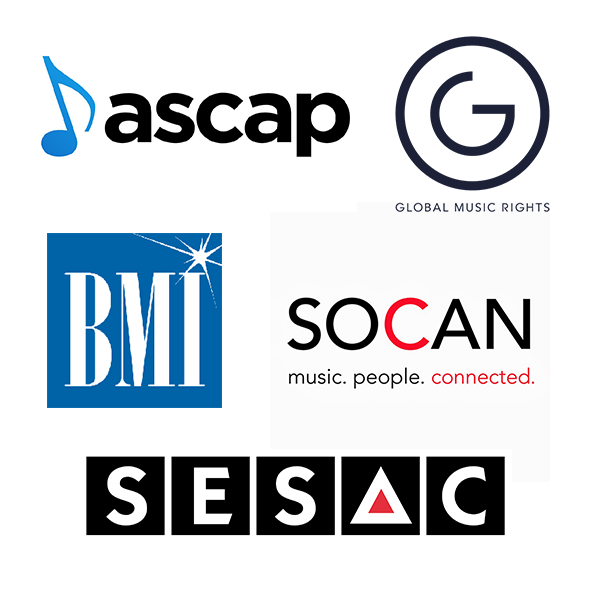 Facts About The Pros

Which Music Belongs To Which PRO?

With a BMI Music License, you can publicly perform all BMI-licensed music. With an ASCAP license, you and play all ASCAP-licensed music, and so on. The PROs collect royalties on behalf of the composers and publishers only on its own roster. A composer may only register with a single PRO. But what if the composer is ASCAP and the publisher is BMI? Or what if an ASCAP composer gets together with a SESAC composer?

As an example, look at the many composers behind the song Too Good by Drake and Rihanna. The publisher in the USA is a part of ASCAP, as are two of the composers. Two are with BMI. If your business is licensed only for BMI, you would not be able to play this song on your hold button or anywhere else. As a company in the US, the only way to be sure you’re not in violation is by registering with all four PROs in the United States.

However, obtaining a license from one PRO doesn’t necessarily mean you’re in the clear — you only have a license for that PRO’s copyright holders. For example, the composer of a song may be represented by ASCAP, while the lyricist may be with SESAC. To avoid this problem, some businesses choose to purchase a blanket license from each of the PROs, which allows the licensee to play any of the music from each PRO’s library. Blanket licenses can range from the low hundreds to several thousands of dollars per year. – Entrepreneur.com

For this article, we are talking about “phone on hold music licensing for business.” When you’re waiting on hold and there is no music or talking–or anything–just silence–you aren’t really sure you’re still connected. The use of music to assure and entertain callers is a very common practice.

What’s on your hold button? How did it get there?

After 21 years in the music on hold business, we’ve seen (heard) just about everything. Here’s a rundown of common phone on hold sources and the challenges each provides.

Radio Station With Commercials – Not Legal.

BMI and other PROs address the use of radio on hold on their websites. “Aren’t the radio stations already licensed?”, you may ask. Yes, however…

… that agreement does not cover further public performance by those receiving the radio broadcast signal. When radio music is used in music-on-hold, that use is a separate performance under the copyright law.

Before starting Easy On Hold, founder Tim Brown called a restaurant to make a reservation. They were busy and placed him on hold. While on hold, Tim heard a radio station playing a commercial for another restaurant. It sounded so good, he hung up and went there.

Ever been placed on hold just to hear the gory details of a violent crime? Or, polarizing and controversial topics? “Morning Zoo” banter? Um, not good for business.

Here’s the word directly from Sirius XM: It is a violation of the SiriusXM Customer Agreement for consumers to use a consumer subscription for your business.

“Public radio. It’s free. It’s supported by donors and tax payers. I should be able to use that without a license.” Here again, using broadcast content on your phones is considered a performance. National Public Radio has been approached on this topic, and even for non-musical works, they say, “We typically deny permission to use NPR content or marks in connection with…Advertising, marketing or promotional activities.”   Clearly, entertaining your callers with someone’s broadcast is a promotional use.

Radio Commercials For Your Business – Probably Not Legal.

If your business is already advertising on radio, you might think, “why not use the radio spots on my phone-on-hold queue? It’s already paid for.” Again, the radio station pays for the music to be used only on the broadcast signal. You can’t use it on the phone without proper licensing.

If your radio spots have no music? Legal. However, not very smart. Radio commercials are built to drive calls to your business. When callers are on hold, they have already contacted you. The call to action does not apply. Radio spots are often 60 seconds in length, which is a lot of promotional talking while your caller is waiting patiently.

… purchase price covers only your private listening use, similar to the “home” use of “home” videos. Once you decide to play these tapes, CDs, or audio files in your business, it becomes a public performance.- BMI

Rental or purchase of sheet music or the purchase of a record[ing] does not authorize its public performance.- ASCAP

Some music on hold message player devices include “royalty free music”. It will be the responsibility of the business installing any device on their phones to be certain that all licenses are paid. To get around this, some music on hold devices only include a music background that has voice recorded over the music. This changes the product from a music-only use to a “synchronized” music + voice, which can be provided royalty-free.

Most people listen to Pandora (Pandora.com) without subscribing. Yet, even if you subscribe to the premium service (Pandora One), you cannot play your Pandora station for your customers. Your personal-use Pandora license prohibits doing so. – Richmond Times Dispatch

As laid out in our T&Cs, Spotify is for personal entertainment only and not for commercial use. This means it can’t be played in public places such as bars, restaurants, stores, schools, etc. – Spotify.com

Default Music That Came With The Phone System – Probably Legal

Some phone systems have some type of default music on hold track. Why do these free tracks sound so awful? To get around music licensing, phone providers have come up with “work for hire” music agreements to allow the music to be played without license. Cisco employees devised the bizarre music that has been used for over 20 years.

Classical Music That Is Out Of Copyright – Not Legal

If you’re thinking, “Hey, Mozart has been dead for a while, he won’t mind if I use his music at my business…” you’re only partially right. Yes, many classical composers are themselves decomposing, but the recordings of those works are protected under copyright law. Publishers still collect royalties for arrangements and recordings of classical works.

Other Types Of Music Licensing

Phone on hold music licensing is just one of many kinds of licensing. Unique licenses are required for each of the following: