Avaya streaming music on hold is becoming more popular for call centers using Avaya 7+ with Aura Call Manager. Business and marketing teams can modify an audio stream from Easy On Hold® by logging in to their own control panel. The tech team is no longer involved in updating messages on hold.

Since the debut of Avaya 7.0 with Aura Media Server, call centers have been able to easily deploy an external URL as the hold music source. In Aura Media Server, inbound streams can be in either http/mp3 or HTTP Live Streaming (HLS). The media server supports up to 64 music streams across all supported providers.

Resources: Why The Time Is Right For Avaya Streaming Music On Hold

Caller queue and hold times continue to be a weak link in call handling scenarios. Why? Longer hold times, a common experience during the COVID-19 pandemic, meant existing hold music tracks would be heard many times over, inducing caller fatigue. Many new cloud communications platforms rushed to market with few options for hold and queue music, other than file uploads or dreary default music.

The need for easily managed, meaningful content in the queue continues. Hold times still happen; still fluctuate through the day, and as always, waiting customers are easily frustrated.

The Easy On Hold® Streaming Queue Music™ service works with the Avaya Aura® Media Server and has been a game-changer for contact center managers, marketers, and customers.

6 Reasons to use Avaya Streaming Music On Hold

In many cases today, streaming audio is simplifying programming for administrators.

Avaya Aura® Media Server Streaming MoH from an External Source [7.0.1] Communication Manager can utilize the IP address information of a Music on Hold (MoH) streaming server to play music when a call is placed on hold. The streaming protocol accepts the standard HTTP/MP3 streaming provided by Easy On Hold. AAMS does not support the AAC format.

Music streams managed by this feature play continuously in the background, similar to a CD on repeat or a radio broadcast. Each stream is replicated efficiently to thousands of endpoints.

As a failover feature, Aura automatically records 15 minutes of content as a backup when if the streaming server is unreachable.

Each music stream is transcoded one time by Avaya Aura® MS, and is shared across all sessions using the same codec. The media server uses the G.722 codec to encode the audio.

You can easily view the status of each stream. Aura will provide a 15-minute fail-over backup audio file recorded from the stream.

Avaya engineers who need information on implementing Avaya streaming music on hold will find details in the Avaya Implementation And Administering Guide for Aura Media Server. 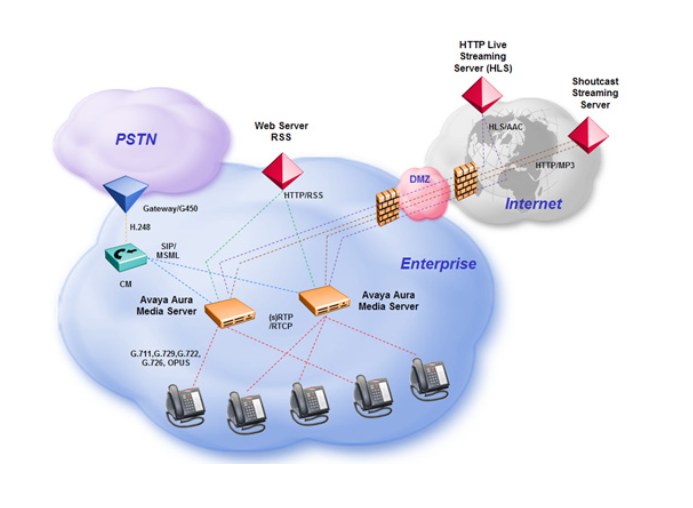 Avaya Streaming Music On Hold is a significant opportunity for your organization. Some of the benefits:

Easy On Hold®, the leader in streaming on hold audio, is the ideal technology partner for turnkey outsourced MOH streaming service. With the introduction of streaming custom music and messages on hold by Easy On Hold, IP PBX platforms are increasingly making accommodations for a custom URL as the music on hold source.

Unlicensed music streams for music on hold can be a legal disaster for your organization. Avaya would be wise to publish warnings about copyright infringement liability that are prudent with the new streaming capabilities.

Get the latest from Easy On Hold

Get free resources, news, and tips to help improve your customer experiences in our monthly newsletter.