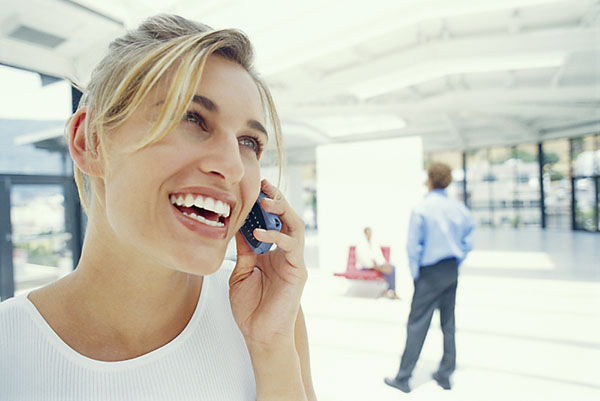 You’ve just installed your snappy new phone on hold music for your business phone system, and want to call in to try it out. With great anticipation you grab your cell phone, call the office number, ask to be placed on hold, and… yuck. The music is warbly, a little scratchy and not at all what you envisioned. What’s going on? Clue: you’re on your cell phone.

Can You Hear Me Now?

First, let’s agree that cell phone call quality varies greatly from device to device and service to service, but that overall cell phone quality is poor. Customer forums are flush with complaints of muffled sound. We’re not talking about cell phone reception, but rather how the phone sounds with a good connection. Add music in the mix, and the problem worsens.

Noise-cancelling technology may be in part to blame for distorting the quality of music. At some point during the evolution of cell phones, Motorola introduced “Crystal Talk”, HTC Nexus used two microphones, and other manufacturers have enabled various tricks aimed at managing background noise. Various forms of active, or electronic noise cancelling has also been in play in cell phones for many years, with some success. Noise cancelling may help make conversations more intelligible, but kills music.

Music, to a cell phone, is more like background noise. The cell phone tries to shut down the music in order to make way for the voice. The phone on hold music begins to sound like it’s being twisted, squeezed and electronically abused.

Dawn Hartford of Nel-Tech Labs reminded us this week that point-to-point signal compression is another reason music is taking a beating over cell calls.

The cell phone company is compressing the data as it travels from point-to-point. It is only compressing the data that the algorithm they are using is determines is relevant – so if it’s a phone conversation and not a data transfer then it is looking for a voice conversation. If the audio is not loud enough or the background music does not fit within the algorithms calculations then it removes that data during the compression process – almost like how an mp3 is compressed when using a low bit rate.

So, when you put your callers on hold, and you’ve got that great toe-tapping music going, cell phone callers are hearing something that sounds more like an AM radio being held under water. So, what’s the best way to deliver a quality music on hold experience for your business callers?

1. Be sure to use custom voice tracks on hold. You’ll be giving the cell phone voice frequencies it is geared to optimize, while telling callers some “news they can use” while they wait on hold.

2. Avoid dynamically variable music. For instance, a classical music piece may have big crescendos as well as quiet passages. Variances in sound levels can cause the on-hold sound to cut in and out.

3. Test different hold message and music volume levels. Your in-office phone system or hosted VOIP phone system might be using its own noise-cancelling technology. A noise gate (also called “gating”) is the process that requires a minimum volume level in order to “break through the gate” to be allowed. If you hear cut-out or hissing, increase the overall volume level to keep the noise gate open.

The Easy On Hold studio was called on by VOIP telephone system provider Ring Central to develop music tracks that would play well on cell phones. In most cases, quality varied greatly between cell phone users. Tracks that caused less distortion were sparsely orchestrated and percussive in nature. Here are some samples:

Is there such a thing as high-definition telephone quality? Yes, it’s real, however not fully realized. AT&T, T-Mobile and Verizon have all been talking about forthcoming “HD Voice”. Earlier this year Wired Magazine described HD Voice as a wideband technology:

Most smart phones support HD Voice, but carriers have yet to completely upgrade their distribution systems to fully integrate the HD experience. Will it make a difference when listening to music on hold? Stay tuned.