A Brief History Of Music On Hold Delivery Systems 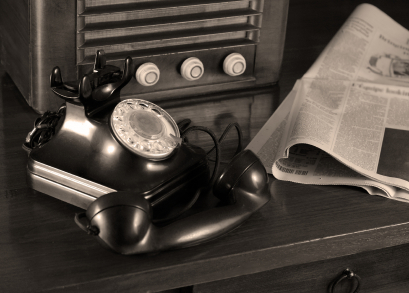 A brief history of music and message on hold delivery.

In 1962, when Alfred Levy discovered a problem with the phone lines at his factory, he located a loose wire that was touching a girder on the building. The steel in the building picked up the music being tranmitted by a nearby radio station. Callers heard the radio station on hold. By 1966, Levy patented his on hold electrical circuit and the “hold button” was born. Pictured: part of the patent Levy filed in 1966. (As told by Wikipedia.)

Music licensing organizations do not approve of re-broadcasts of copyrighted music over phones without a license. Soon it was discovered that custom announcements on hold could improve sales. Cassette tapes provided audio programs that would repeat endlessly (or “loop”). The one pictured is still sold for over $350!

With digital audio available since the early 1980’s (the first commercially produced CD was an album by Abba in 1981) music on hold players eventually caught up and allowed use of audio CDs. The unit shown here is still sold today. The disc is used to transfer the sound onto an internal audio chip.

The Motion Pictures Experts Group was formed in 1988 to set audio standards for the rapidly evolving digital audio market. Within ten years the group had landed on a form of digital compression for the transfer and playback of audio, greatly reducing the amount of data needed to create good-quality audio. Many message on hold players use .mp3 audio, allowing quick downloads from a website or email, and portability via removable media (usb) drives. The unit pictured is a USB-Type player made by ProDigital.

In the fall of 2013, Easy On Hold launched the first custom messages on hold streaming service, offering unique streaming channels to customers worldwide. Easy to manage 30 to 60 second audio spots rotate on a specific schedule to deliver timely content to callers on hold. Some cloud-based phone systems can use this service with no equipment needed, while others use a digital streaming music on hold receiver (shown: Grace Digital IRBM20) to capture the live audio stream. This solution is actually ahead of the curve, as cloud-based phone systems are slowly migrating toward streaming content for callers on hold.